❷ Opinion/Analysis:  HOME  DEMOLITIONS  ARE  ORGANIZED  STATE  VIOLENCE
` ` ` ` ` ` ` ` ` ` ` ` ` ` ` ` ` ` ` `
❶ FATE  OF  HEBRON  HILLS  VILLAGE  LIKELY  TO  BE  DECIDED  BY  ISRAELI  DEFENSE  MINISTER
Ma’an News Agency
August 1, 2016
In the latest development in a decades-long legal battle by Palestinian residents of the village of Susiya in the southern Hebron Hills to remain in their ancestral lands, an Israeli supreme court hearing confirmed on Monday that a decision regarding the fate of the threatened village could likely be decided by ultra-right Israeli Defense Minister Avigdor Lieberman.
___The hearing was set to decide whether to accept the state of Israel’s request to immediately and without prior notice demolish 40 percent of the occupied West Bank village where some 100 people live, according to Israeli NGO Rabbis for Human Rights (RHR).     MORE . . .
. . . ❶ ― (ᴀ) AMERICAN  SENATOR  DIANNE  FEINSTEIN  GRACIOUSLY  RECEIVES  SUSYA  &  UM AL KHEIR  FAMILIES
Rabbis for Human Rights
September 29, 2015
California Senator Dianne Feinstein graciously received representatives from the villages of Susiya and Um Al Kheir – two villages under the threat of demolition by the state of Israel. In July of this year, Senator Feinstein sent a letter to Prime Minister Benjamin Netanyahu asking him to halt any demolition orders for the village of Susiya.    MORE . . .
. . . ❶ ― (ᴃ) RECKLESS  POLITICKING:  LIEBERMAN  TO  BE  NAMED  ISRAEL’S  DEFENSE  MINISTER
Brookings Institution
Natan Sachs
May 20, 2016
[. . . .]
Netanyahu is now poised to bring back Avigdor Lieberman, a former foreign minister and Israel’s least diplomatic politician. Lieberman won’t be returning to diplomacy, however. Instead, he will get a significantly more powerful position, second only to the prime minister: minister of defense.
[. . . .]
Lieberman’s pending appointment has been met with astonishment by the opposition in Israel, by many in the military which he will oversee, and indeed here in Washington—and with good reason.
___Just these past few months, Lieberman has viciously attacked both Netanyahu and the military brass for what he claimed was a weak response to terrorist attacks.
[. . . .]
Most importantly, Israel’s actual policy may be affected significantly by this move. Of all the governmental posts, defense is the one that has the most effect on the crucial questions of security for Israelis (and on the daily lives of Palestinians). . . . Netanyahu’s political brilliance has wrought one of the most hardline governments Israel has ever had.      MORE . . .

From Harvard International Review
On November 10th, 2013, the Israeli cabinet voted in a special session to authorize the demolition and removal of Umm al-Hiran, an “unauthorized” Palestinian Bedouin village in the Negev Desert. In its place was to be built a new community for national Jews to be named Hiran, which had been planned and approved in early 2002. The stated reason for this demolition and forceful eviction is the existing settlement’s lack of permits. . .  Umm al-Hiran itself was set-up in early 1956 by the Palestinian Abu-Alkian tribe after they had been forced to move from their ancestral tribal lands near Kibbutz Shoval in the Northern Negev.
___A more critical development related to this event is the Israeli Parliament’s passing of the first reading of the Prawer law [2011]. . .  [which] would cause the forceful displacement of 40,000-70,000 Arab Bedouins from the Negev, the confiscation of 800,000 dunams of Arab land, the razing to the ground of 36 or more Arab villages. . . According to Adallah, the Legal Center for Arab Minority Rights in Israel, the “underlying premise of the draft bill is that there is no Bedouin land ownership,” effectively negating the “population’s right to property and historic affinity to the land.”
[. . . .]
The debates within Israel proper surrounding the eviction of the Arab Bedouin communities focus on the same themes that propel the building and expansion of settlements in the Occupied West Bank and the Golan Heights. Since Israel’s occupation of both areas in 1967, policy has been to effectively alter the areas’ demographic landscape by transferring and settling Jewish civilian populations onto confiscated lands, with the end goal of preventing the emergence of a contiguous Palestinian state. Indeed, settler movement into the West Bank has swelled in the past 20 years, and at present some 344,779 settlers reside in approximately 130 settlements authorized and protected by the Israeli government. In addition, another 200,000 settlers have moved into East Jerusalem in hopes of altering the Palestinian demography in the city and preventing a possible Palestinian capital from emerging if a “peace” agreement is reached.

❷ Opinion/Analysis: HOME  DEMOLITIONS  ARE  ORGANIZED  STATE  VIOLENCE
+972 Blog
Hagai El-Ad
July 28, 2016
Over the last decade, Israel has demolished over 1,100 Palestinian homes in the West Bank, leaving homeless more than 5,199 people, including at least 2,602 minors. The extensive demolitions are part of a broader Israeli policy of forced transfer. The following speech was delivered at a conference on home demolitions held at the Knesset on July 27, 2016.
[. . . .]
First and foremost, these figures deal with human lives. Lives that Israel ruins, deliberately, as part of a broader strategy designed to dispossess Palestinians from vast areas of the West Bank, to make their lives unbearable until they finally take the hint and move, to move them into smaller concentrated areas, to push them out.
[. . . .]
We at B’Tselem present these figures and explain their import to the Israeli public, to you – members of Knesset, and to the world. We show how Israel managed to [employ] bureaucratic mechanisms to promote the big move of dispossessing Palestinians in the West Bank, and to justify it all on administrative and legal grounds. This is organized state violence, and all the Israeli branches of government are party to it, each playing its own role: the planning mechanisms, the military, the Civil Administration, and also the settlers, and last but not least, the courts that serve as the crowning jewel in whitewashing the injustice.     MORE . . . 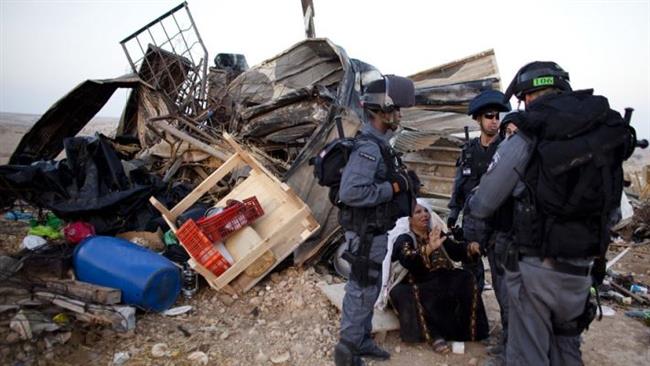