❶ The anguish and anger on Gaza’s walls
. . . ― (a) Cultural initiatives in Gaza are short on cash
❷ Nablus high school awarded $1 million in Dubai
. . . ❷― (A) Gaza University to launch first film major in Palestine

❸ Jericho: World’s Largest Floor Mosaic Opened for Public Display
. . . ❸― (a) Israeli Ministry of Antiquities demolishes two graves in Jerusalem
` ` ` ` ` ` ` ` ` ` ` ` ` ` ` ` ` ` ` `
❶ THE ANGUISH AND ANGER ON GAZA’S WALLS
The Electronic Intifada
Sarah Algherbawi
Oct. 18, 2016
Twenty meters high and 15 meters wide, the mural on a wall of a 12-floor building in Gaza City is unmissable.
___The artwork, “Besieged Childhood,” has garnered renown for its creators. It depicts a child wearing a keffiyeh scarf, a melancholy expression on her face, her hands wrapped around two bars, like those of a prison cell.
___Its location, on the Zafir 9 Tower in an upmarket area of Gaza City, is deliberate. During Israel’s 2014 assault, fighter jets destroyed one of Zafir 9’s sister towers, Zafir 4, in a bombing denounced as a war crime by Amnesty International.
__No one was killed, though more than a dozen were injured and the homes of more than 40 families were destroyed. More than 200 residents were left homeless in what Amnesty described as an operation with “no military justification.”          More . . .
. . . ❶― (a) CULTURAL  INITIATIVES  IN  GAZA  ARE  SHORT  ON  CASH
Al-Monitor (Palestine Pulse)
Oct. 23, 2016
The Palestinian Cultural Palace, a cultural center created by a youth group in the Gaza Strip, organized its first artistic and cultural activity funded by the Rachel Corrie Foundation and in cooperation with the local Women’s Programs Center on Aug. 22 in Al-Mishal Theater in Gaza City.
__ The center’s first artistic group, made up of children ages 12-16, organized a national folkloric play titled “Operetta: Time for Peace,” which targets all social categories of all ages.
___The Palestinian Cultural Palace has limited finances in light of the lack of government and international financing.     More . . .

❷ NABLUS  HIGH  SCHOOL  AWARDED  $1  MILLION  IN  DUBAI
Ma’an News Agency
Oct. 24, 2016
Palestinian high school Talai al-Amal (“Vanguards of Hope” in Arabic), located in the city of Nablus in the northern occupied West Bank, was awarded $1 million in Dubai on Monday for having the best reading initiatives in the Arab world.
___The announcement was made at the closing ceremony of the Arab Reading Challenge, launched in 2015 by United Arab Emirates Prime Minister and ruler of Dubai Sheikh Muhammad bin Rashid al-Maktoum. The ceremony took place at the Dubai Opera House, where al-Maktoum presented the awards.     More . . .
. . . ❷― (A)  GAZA  UNIVERSITY  TO  LAUNCH  FIRST  FILM  MAJOR  IN  PALESTINE
Al-Monitor (Palestine Pulse)
Oct. 23, 2016
Gaza is getting ready to launch its first film studies major in the Palestinian territories in January 2017. The university program will be implemented in universities, as hundreds of students wishing to major in cinematography and film studies are unable to travel abroad to pursue their studies given the closure of crossings in the Gaza Strip, namely the Rafah crossing.
___ Although launching the program could be a bumpy ride given the lack of the necessary equipment, such as school curricula and other work equipment, the program organizers, a group of people who hold university degrees from art faculties in Egypt, are seeking to bring in some material from abroad or tap into the available modest tools in Gaza after having obtained preliminary approval by the Ministry of Culture in early October.     More . . .

[Note: The follwing article is an introduction to the important archeology of the site of which Hisham’s Palace is a part. It is somewhat technical, but accessible to the lay reader.]

The Umayyad palace at Khirbet al-Mafjar, also known as QASR HISHAM, has been known and appreciated as the most beautifully decorated o f the Umayyad qusur (socalled desert castles). Its fabulous mosaic carpets, human and animal figures, extensive stucco wall decorations, and frescoes have made this monumental complex, located just north of the city o f Jericho, an extraordinary archaeological site. Excavated by Dimitri Baramki for some 13 seasons, in the 1930s and 1940s, the site has been assumed to be completely revealed.
___A new research project for the past five years has proved this assessment completely unfounded. At the instigation of Dr. Hamdan Taha, director of the Palestinian Department of Antiquities, the Jericho Mafjar Project was conceived as a joint venture of the Palestinian antiquities department and the University of Chicago. This was a truly joint project, with equal Palestinian and foreign archaeologists and specialists working, living, and eventually writing reports together. The result is a new archaeological monument, one which is situated within an archaeological park; well-marked paths with bilingual signage guides the visitors after they have seen an introductory film and visited a modern museum, displaying both older and very recent discoveries from the excavations.

❸ JERICHO:  WORLD’S  LARGEST  FLOOR  MOSAIC  OPENED  FOR  PUBLIC  DISPLAY
International Middle East Media Center – IMEMC
Oct. 21, 2016
The Palestinian Ministry of Tourism and Antiquities has unveiled the world’s largest floor mosaic for public display, in the West Bank district of Jericho.
___The mosaic covers the floor of the reception hall and the large bath of Hisham’s Palace, an Islamic archaeological site in the north of Jericho, and has been described as one of the largest and most beautiful mosaic floors in the world.    More . . .

. . . ❸― (A) ISRAELI  MINISTRY  OF  ANTIQUITIES  DEMOLISHES  TWO GRAVES  IN  JERUSALEM
Alray-Palestinian Media Agency
Oct. 23, 2016
Employees of “Israeli nature authority” demolished on Sunday two graves in the cemetery near Bab Al-Rahma east of Al-Aqsa mosque entrance and detained the responsible of cemetery staff as he tried to confront the attacks.
___The staff of Israeli Antiquities accompanied by Israeli soldiers destroyed two graves and tombstones in the hill near the cemetery, where the land belongs to the family of al-Husseini, the director of Al-Aqsa mosque Omar Al-Kisswani explained.     More . . . 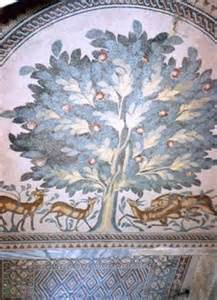