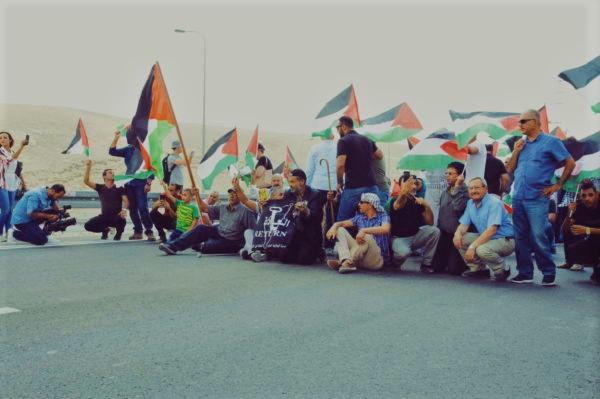 PACE  OF  ISRAEL’S  LAND-GRAB  POLICY  HITS  ZENITH  IN  SALFIT      Israelis residing in the Atz Afraim outpost continue to level Palestinian lands in Mesha village, west of Salfit, to expand illegal settlement.    ___Eye-witnesses said Israeli settlers have been bulldozing Palestinian lands to establish new facilities in the area.   ___The occupation authorities continue to prevent Palestinian farmers from entering their land lots behind the apartheid wall.   More . . .
JEWISH  SETTLERS  EXPAND  OUTPOSTS  IN  THE  JORDAN  VALLEY  (VIDEO)        Israeli settlers “started building and setting up housing structures” in a settlement outpost in Khirbet Al-Sweida village in Tubas in the northern Jordan Valley of the occupied West Bank, reported Ma’an News Agency yesterday.  “The settlement outpost was set up in May 2018 south of the Shadmot Mehola Israeli settlement, the only area where Palestinian shepherds could herd their sheep”.  More . . .
Related . . . ISRAELI  SETTLERS  VANDALIZE  PALESTINIAN  PROPERTY,  PAINT  RACIST  GRAFFITI

A  PALESTINIAN  GIRL  INTRODUCING  NEW  ART  TO  GAZA     At her modest home in the northern Gaza Strip, Sahar Wishah joined the world of arts by turning iron and wooden tools into beautiful paintings.   [. . . .] The girl uses nails, threading, wooden boards, and a small iron hammer to create those drawings and artworks. She is relying on the internet and the visual materials published on it to develop her artistic talent.   ___This art, which attracted many citizens and the Palestinian and Arab public, dates back to the Ottoman era.   More . . .  More from Reuters . . .

PREPARATION  OF  INTERNATIONAL  CONFERENCE  FOR  UNRWA  SUPPORT        Secretary General of the Arab League, Ahmad Abul Gheit, revealed on Wednesday that the international conference for the support of the United Nations Relief and Works Agency (UNRWA) will be organized by Jordan and Egypt.    ___Ahmad Abul Gheit held a press conference at the headquarters of the Arab League in Cairo at the end of a meeting with Arab foreign ministers during which he revealed that both Jordan and Egypt are organizing the international conference.   ___He said “we were informed that Jordan and Egypt have called for an international conference with a legal and political framework to discuss the UNRWA crisis.”   More . . .
DEPRIVING  PALESTINIAN  REFUGEES  OF  THEIR  BASIC  RIGHTS  A  RECIPE  FOR  TROUBLE,  SAYS  PLO  OFFICIAL        Depriving 5.3 million Palestinian refugees of their right to education, health and work by dismantling the international agency that has been taking care of them since their forced dispersion in 1948 is an invitation for  trouble not only in Palestine, but also in the region where the Palestinian refugees are based, Hanan Ashrawi, member of the Executive Committee of the Palestine Liberation Organization (PLO), said on Wednesday.    More . . .

INTERNATIONAL  SOLIDARITY  MOVEMENT        ISM London is offering a day of pre-training for prospective volunteers who are interested in joining the International Solidarity Movement on the ground in Palestine. Any volunteer is required to participate in training before joining activities in Palestine.   Information . . .    Donate . . .

from “MIDNIGHT,”  BY  MOURID  BARGHOUTI

After the dust and smoke
have cleared from the house that once stood there
and as I stare at the new emptiness
I see my grandfather wearing his cloak
wearing the very same cloak –
not one similar to it,
but the same one.
He hugs me and maintains a silent gaze,
as if his look
could order the rubble to become a house,
could restore the curtains to the windows,
and my grandmother to her armchair,
as if it could retrieve her colored medicine pills,
could lay back the sheets on the bed,
could hand the lights from the ceiling,
and the pictures from the walls,
as if his look could return the handles to the doors,
and the balconies to the stairs,
and persuade us to resume our dinner,
as if the world had not collapsed,
as if Heaven had ears and eyes.
He goes on staring at the emptiness.
I say:
What shall we do when the soldiers leave?
What will he do when the soldiers leave?
He slowly clenches his fist,
recapturing a boxer’s resolve in his right hand,
his coarse bronze hand,
the hand that tames the thorny slope,
the hand that holds his hoe lightly,
and with ease,
the hand which, with a single blow,
splits a tree stump in half,
the hand that opens in forgiveness,
the hand that closes on the candy
with which he surprises his grandchildren,
the hand that was amputated
many years ago.
–– from Mourid Barghouti,  MIDNIGHT  AND  OTHER  POEMS,  trans. Radwa Ashour. Arc Publications, Todmorden, UK, 2008.