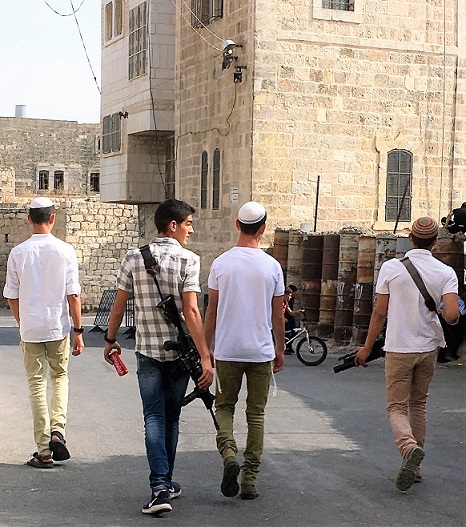 | ISRAELI  SETTLERS  SEIZE  HISTORICAL  BUILDING  IN  JERUSALEM
Israeli settlers took over a historical Palestinian building in the Aqbat Darwish neighborhood of Jerusalem’s Old City, in the central occupied West Bank, early Thursday morning.    ___. . . residents of the neighborhood were shocked by Israeli settler seizing the building in the early morning hours of Thursday.    ___Israeli settlers reportedly moved into the building, belonging to the Judeh family; the building was used as a clinic.    ___On Wednesday, Israeli settlement group Elad had taken over a Palestinian-owned property in the Silwan neighborhood of the city.  ___There are an upwards of 300,000 Israeli settlers residing in East Jerusalem, with at least 500 living in Silwan among a population of 45,000 Palestinians.   More . . .
| IN  PHOTOS:  KHAN  AL-AHMAR  PREPARES  FOR  DEMOLITION  AFTER  DECADE-LONG  BATTLE  TO  REMAIN
A tiny Palestinian Bedouin town located in the West Bank hills outside of Jerusalem is bracing for an impending eviction to make way for plans to expand an Israeli settlement. The case reached its endpoint on Monday when the deadline ordered by Israel’s high court expired on the community of Khan al-Ahmar to vacate and demolish their own homes and an elementary school.    More . . .

| ISRAELI  FORCES  KILL  15-YEAR-OLD  PALESTINIAN,  INJURE  DOZENS  IN  GAZA
A 15-year-old Palestinian was shot and killed, while dozens of others were injured, on Wednesday evening, after Israeli forces opened fire at Palestinian protesters near the Erez crossing (Beit Hanoun) between Israel and the northern besieged Gaza Strip.    ___. . .  15-year-old Ahmad Samir Abu Habel was shot in the head by Israeli forces as he participated in protests near the Erez crossing in northern Gaza.   ___Medical sources confirmed that 24 Palestinians were shot and injured by Israeli forces . . .      More . . .
| AS  OLIVE  HARVEST  SEASON  BEGINS  IN  WEST  BANK,  ISRAELI  SETTLERS  STEAL  PALESTINIAN  CROPS
As Palestinians embark on picking their olives, considered one of the main income-generating seasons for thousands of Palestinian families in the occupied West Bank, Israeli settler were seen on Thursday stealing their olive crops.    ___According to Yehya Qadoos, head of Burin village council, settlers sneaked to land belonging to farmers in the village and stole their olive crops.   More . . .

| PALESTINE  UNDER  OCCUPATION:  ONE  VILLAGE’S  RESISTANCE:  VIDEO  . . .
| US,  IN  ITS  BLIND  SUPPORT  FOR  ISRAEL,  DISPLAYS  DISDAIN  OF  INTERNATIONAL  LAW,  SAYS  FOREIGN  MINISTRY
The US Administration’s announcement of its intention to withdraw from the Additional Protocol to the Vienna Convention reaffirms the administration’s disdain towards international law and the rules-based international order, the Palestinian Foreign Ministry said in a statement on Thursday.    ___“This administration is willfully disrupting and undermining the international order because of its blind support to Israel’s illegal colonial policies, thus advancing this hostile agenda at the expense of global cooperation . . .”     ___The Ministry said that “the State of Palestine has exercised its right to defend itself through legal means by resorting to the International Court of Justice on the issue of the illegal US embassy move to our capital, Jerusalem. This step was based on the compulsory jurisdiction of Court, as stipulated in Article I of the Additional Protocol.”    More . . .

“TO  JERUSALEM,”  BY  YUSUF  HAMDAN
You came to me, chained,
Carried forcibly.
You came
Flowing, like the tears of a wounded heart.
And yet, I will not meet you.
Forgive me,
For today, you are occupied!

Have you indeed come to me?
In my passion, I prayed often
Without a “Rock,”
And when I found no water,
I simulated the ritual ablution;
And when you finally came to me, I vowed:
I will not accept you occupied!

I want you to be a Kaaba for the people of the earth,
A spacious house,
Without guards;
I love you . . . a voice from a minaret,
The sound of horns
Mingled with church bells.
I love you, a jasmine in the open air,
But I have sworn, yes I have,
I will not accept you occupied!

From: THE  PALESTINIAN  WEDDING:  A  BILINGUAL  ANTHOLOGY  OF  CONTEMPORARY  PALESTINIAN  RESISTANCE  POETRY.  Ed. and Trans. A. M. Elmessiri. Boulder, CO: Lynne Rienner Publishers, 2011. Reprint from Three Continents Press, Inc., 1982.    Available from Palestine Online Store.
___Yusuf Hamdan was born in 1942 in the Triangle area of Palestine. He lived in Haifa in the early ‘60s and taught in a nearby Arabic school. He published his poems in al-Jadid, al-Ittihad, and al-Ghad, and lost his teaching position because of his poetry. In 1970 he left Israel for the US, where he presently lives and works.