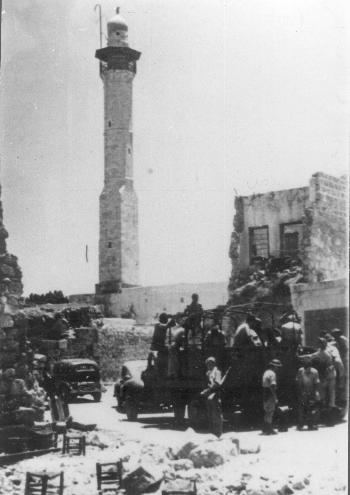 SELECTED   NEWS   OF   THE   DAY. . .
|   EGYPTIAN  SECURITY  DELEGATION  ARRIVES  IN  GAZA  STRIP  TO  ESTABLISH  THE  TRUCE
The Israeli Public Radio said, on Wednesday, that an Egyptian security delegation will arrive in the Gaza Strip on Thursday for talks aimed at stabilizing the ceasefire and discussing ways to improve the living conditions in the Gaza Strip.    ___The radio added that the delegation would be headed by the official of the Palestinian file in the intelligence service, Ahmed Abdelkhaliq, and expected that some Hamas leaders would go to Egypt in the next few days.    ___Egyptian mediation between the Palestinian Resistance and the Israeli occupation succeeded in reestablishing the cease-fire in Gaza after an unprecedented round of escalation that began on Sunday and lasted about 48 hours.     More . . .
|   ISRAELI  FORCES  OPEN  FIRE  AT  PALESTINIAN  FARMERS
Israeli forces opened fire, on Friday, at Palestinian farmers working in their lands, east of the al-Qarrara town in the southern besieged Gaza Strip.    ___Locals told Ma’an that Israeli forces stationed at the Kissufim military site opened fire at Palestinian farmers for unknown reasons.    ___The farmers left their lands in fear for their lives. . .   More . . .
. . . . Related  SUFFOCATION  CASES  AMONG  PROTESTERS  NEAR  RAMALLAH  [RAS  KARKAR  VILLAGE]
. . . . Related  GAZA  FISHERMAN  SHOT,  KILLED  BY  ISRAELI  NAVY
|  UN  SPECIAL  RAPPORTEURS  GIVE  ISRAEL  60  DAYS  TO  RESPOND  TO  ‘DEEP  CONCERNS’  REGARDING  JEWISH  NATION-STATE  LAW
Following a special request for action issued by  ADALAH – THE  LEGAL  CENTER  FOR  ARAB  MINORITY  RIGHTS  IN  ISRAEL, four United Nations special rapporteurs have given Israel a 60-day deadline to respond to their grave concerns regarding the Jewish Nation-State Law, adopted by the Israeli parliament, the Knesset, on July 19.    ___The 60-day period began on November 2 when [the four UN officials] sent a communiqué to Israeli authorities expressing deep concerns regarding the impact of the new law.    ___In their letter, special rapporteurs expressed “deep concern” that Israeli Basic Law appears “to be discriminatory in nature and in practice against non-Jewish citizens” . . .   More . . .
. . . . Related  KUWAIT  TRANSFERS  $42  MILLION  TO  UNRWA
. . . . Related  WORLD  BANK  WILL  CONTINUE  TO  PROVIDE  BUDGET  SUPPORT  TO  PA
. . . . Related  DIRECTOR  OF  GENEVA  CENTER  CALLS  FOR  ENDORSEMENT  OF  2018  WORLD  CONFERENCE  DECLARATION
. . . . Related  CZECH  REPUBLIC  TO  CONTRIBUTE  OVER  €200,000  TO  UNRWA

COMMENTARY    AND    OPINION. . . .
|   SUSTAINING  CYCLES  OF  ISRAELI  AGGRESSION  IN  GAZA
Ramona Wadi
It is time, once again, for the hyphenated “Israel-Gaza” paradigm – an invention that suits mainstream narratives. As the media mulls the possibilities of another Israeli military aggression against Palestinians in Gaza . . .   since “Operation Protective Edge”, Israel regularly hinted at another, definite round of violence to eliminate Hamas . . .  inflicting a high percentage of collateral damage.    ___As speculation mounts amid reports of airstrikes and rocket fire; the latter enhanced through numbers that purposely render Israeli violence a purported retaliation, Israel is assured of an audience that is ready to absorb whatever trajectory it decides upon . . .    [. . . .] Yet, in terms of media depiction, there is already a premeditated slant . . .  Rocket fire is the subject of statistics while airstrikes imparted as an acceptable method of containment. The concept of involvement and, as a result, violence, is shifted upon Hamas, as opposed to the Israeli incursion in Gaza which the resistance had every right to disrupt.    More . . .

NOTICES  FROM  ORGANIZATIONS. . . .
|   AWARDS  SEASON  LAUNCHED  AT  MEMO’S  PALESTINIAN  LITERARY  EVENT
A packed audience hall gathered in London this evening [November 15, 2018] to listen to some of the  PALESTINE  BOOK  AWARD’S  shortlisted authors discuss their works ahead of the winners’ announcement tomorrow evening.    ___Tonight three of the shortlisted authors: Tareq Baconi, author of “Hamas Contained: The Rise and Pacification of Palestinian Resistance”; Maha Nassar, author of “Brothers Apart: Palestinian Citizens of Israel and the Arab World”; and  REJA-E  BUSAILAH,  author of “In the Land of My Birth: A Palestinian Boyhood”.    ___The evening was chaired by Victoria Brittain and Ibrahim Darwish, two trustees of the Palestine Book Awards. Brittain opened the evening by reflecting on how the Awards are now in their seventh year, adding that when the event started back in 2011 she could not have expected the level of support there has been from publishers, authors and the general public.    More . . .

The sun came out that day from the depth of winter
like the rare orphan of good luck —
what else can the light of heaven be
on a day rising from the dead of winter?

And she had risen before the sun that day
and like her mother and grandmother before her
she washed by hand and wrung by hand
the linen for spouse and child,

and like mother and grandmother
she walked up the wooden ladder
with the pail onto the roof
into the shadow of the Holy Heights —
so clear was the sky
it almost recalled the sight and the scent of the sea down west.

Faithfully she hung her labors on the rope
article by article
that the good sun might dry them for her,
she clasped each with a wooden pin
as safeguard against the prankish wind —

it was no senseless nature that did it when she was done
just about to come down for other chores,
it was no fiendish Nazi,
it was one of the Chosen
selected her heart for his anointed lead
so that limp went the spring in the covenant
which joined soul and limb —

Reja-e Busailah has been blind since infancy. At age 7, he and his family were forced marched by Zionist forces from their home in Lydda into exile. He was educated in Cairo and earned a PhD in English from New York University. He is the author of a collection of poetry, “We Are Human,” (1985). He taught at Indiana University for 30 years and is now retired. He recently published his memoir “In the Land of My Birth: A Palestinian Boyhood.”

From BEFORE THERE IS NOWHERE TO STAND: PALESTINE ISRAEL POETS RESPOND TO THE STRUGGLE. Ed. By Joan Dobbie and Grace Beeler. Sandpoint ID: Lost Horse Press, 2012.  Available from B&N.